Mold is a growing concern and a basement, as well as crawl space, is a great place for mold to grow. Mold and mildew are musty smelling fungi that thrive in moist conditions. Mold is one of the results that can be easily seen because of the moisture in the crawl space.

Mold spores, the seeds of mold, are in the air everywhere. All they need to grow is an organic material such as wood, the right temperature range, and moisture. Of these, the only one that can be controlled is moisture.

Mold can grow on dirt, insulation, framing and even under your carpet on the first floor. Mold destroys organic materials as it feeds on them. Mold reproduces by producing millions of floating airborne spores, which some people are very sensitive to. Spores can be dormant for many years, waiting for the right conditions to grow. Some molds produce mycotoxins, such as the black mold Stachybotrys. Many articles can be found on the effects of mold, and toxic mold. 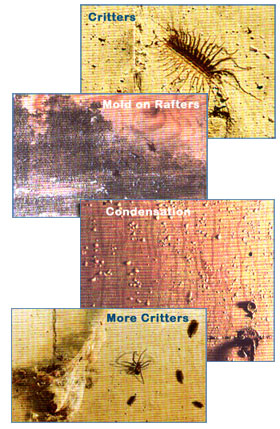 Dirt Crawl Spaces are great places to live, thrive and reproduce if you're a bug. There is an even temperature, moisture, damp wood, and shelter. Spiders, beetles, centipedes, termites, and all kinds of other insects are found in dirt crawl spaces. Animals such as mice, (dead and alive) are commonly found in dirt crawl spaces. In some cases, even rats, snakes and small animals have been found.

Because of the high humidity level in a dirt crawl space, cool surfaces such as the earth at 55 degrees, concrete and metal surfaces will sweat with water vapor condensing out of the air. This causes rot, smells, and is a water source for critters.

Looking for a price? Get a no cost, no obligation free estimate.