When I arrived you could see the eagerness on Mr. M’s face to find a solution to his water issue. Going through the basement it was clear that he had an issue. There was water building up on the block foundation and his sump pump has failed him. Mold was growing on the blocks with water built up in them and Mr. M was tired of trying to find a way to cover it up. Mr. M just wanted his man cave back. It was time to get to work.

After sitting down with Mr. M and going through a few solutions, we finally landed on one that would relieve all the water building up around and in his home. It would give him the best means to pump it out. Mr. M chose to go with a full perimeter Water Guard System, a Triplesafe Sump Pump System, and also have us eliminate some mold spots. Mr. M no longer has to worry about water coming into his man cave and he can install new cellar doors with complete peace of mind. 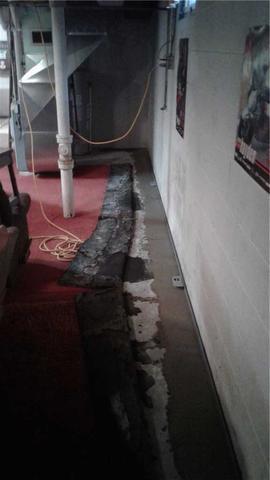 WaterGuard installed around the perimeter of the basement.

Back to Previous Page
Back to Case Studies