During a heavy rainfall on June 11, 2015 Fox 11 news visited Sure-Dry to get feedback on what this rain does for business and what precautions homeowner's can take to keep their basement dry. See the full story here. Full excerpt can be found below. 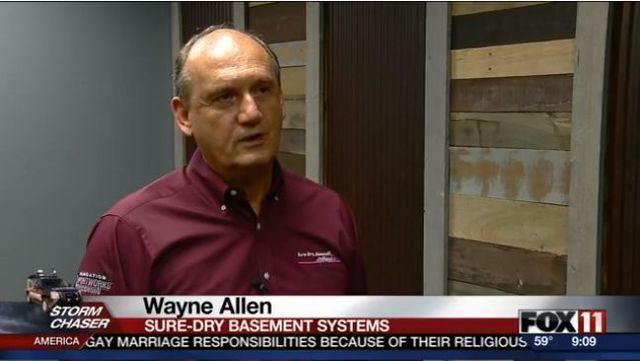 FOX VALLEY – This rain we experienced Thursday might not seem like much, but considering what the forecast is for the coming week, there are a few things you should be keeping in mind.

Thursday showed it doesn’t take much, not more than a slow consistent rain, to get the Fox River moving.

“It was a foot and a half below the wooden dock, the platform that goes out to the bridge, it’s been going up all day,” said Robert Miller of Appleton.

Gates opened up river are contributing to the rising river here in Appleton’s Lutz Park.

“A couple canoe people that came by, kayakers, they pulled out because it was too strong for them to paddle against the current,” said Miller.

The rainy forecast was enough for Wisconsin Public Service to send out a notice about being near rivers and dams.

“We don’t think there is a real cause for concern in terms of flooding and activity by dams, but it’s a good opportunity for us to remind customers that rising water, heavy water, fast water or being around dams is a dangerous place,” said Kerry Spees with Wisconsin Public Service.

This weather is also enough to keep businesses like Sure-Dry Basement Systems busy.

“We’ll tend to get several hundred calls off a rainfall that goes for several days,” said Wayne Allen of Sure-Dry Basement Systems. “If we end up with three to six inches, it really gets chaotic.”

Allen has a few tips that could help you avoid being one of those calls.

“We can make sure that our gutters are clean, downspouts and gutters should be at least six to eight feet away from the house,” said Allen. “If you have window wells, they should be covered and if the grade next to the home is flat to negative towards the house, it’s going to be very important to raise that up.”

Back to Previous Page
Back to News & Events